Consequently, in secondary schools, our study aimed to monitor aspects of aspects of young people’s ‘science capital’ at a year group level, rather than the impact on individual young people.

Between 2015 and 2019 our survey found the following results.

By 2019 fewer students were reporting that ‘people who use science in their jobs are very clever’. This is positive because it could potentially reduce the barrier to students entering science careers.

Changes in Parental attitudes to science:

We saw a drop in young people’s confidence in their science abilities, and a widening of the confidence gap between boys and girls.

Enjoyment and value of science:

Recommendations and Areas for Further Investigation

It is clear that more work is needed to understand the causes of the declines found in this study.

NUSTEM have developed a Theory of Change that provides the theoretical underpinnings and context for the complex mix of changes that we think are necessary to lead to a significant change in the number and diversity of those choosing STEM careers. We understand that increasing the diversity and number of young people choosing a career in STEM post-18 is a complex challenge. Our research continues to test and refine the Theory of Change.

From these results, and our Theory of Change, we make the following recommendations to help increase in the diversity of STEM. 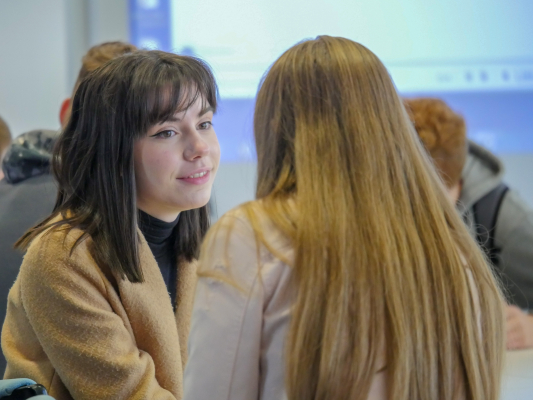 The ‘Science and You’ survey (left) is an adapted version of the instrument developed and employed in the ASPIRES study, focusing on 20 questions covering science conversations, science social contacts, science self-concept, perceptions of scientists and the utility of science in careers.

In this study we used the year 9 cohort in 2015 who had received no intervention at baseline, as a comparison group for the year 9 group in 2017 and 2019 who had participated in intervention activities.

The intention was to use the data to assess the impact of activities and interventions carried out in the schools. However, when looking at the range of interventions that took place with only the students in these cohorts between 2015 and 2019, the number of activities was either low or no activities had taken place in the appropriate year group.

As a result, the data were instead used to document changes in aspects of young people’s science capital between 2015 – 2019, rather than attempting to identify impact of particular activities.

Data were coded and analysed using the statistical analysis software SPSS. Chi square and Fishers Exact tests were used to determine statistically significant relationships between comparison groups. Significance is reported where the p value is less than 0.5.

Overall, we find that many aspects of young people’s science capital have declined during 2015 – 2019, with certain aspects declining among females, and others among males.

Promisingly, however, we note the young people’s perceptions that scientists need to be very clever is also in decline.

Between 2015 and 2019 we have noted a decline in young people’s confidence in their science abilities.

Our baseline data in 2015 found a statistically significant difference between the genders agreement with ‘I am good at science’, with boys to be more confident in their science abilities (58%) than girls (48%). Analysis of the 2019 data finds the gap between the genders is still significant and has widened, with males more confident they are ‘good at science’ (41%) than females (23%).

We have seen a decline in children’s enjoyment of science between 2015 and 2019, that is more prominent among males. Analysis finds:

Our baseline study in 2015 found a statistically significant difference between the genders for ‘I look forward to my science lessons‘, with more males agreeing (50%) with this than females (39%). Analysis of 2019 data however finds this gender difference is no longer significant, with levels of male agreement (36%) now almost as low as females (32%).

Between 2015 and 2019 we note a changes in the perception of scientists among pupils in secondary schools. Analysis finds:

Our baseline study in 2015 found a statistically significant difference between the genders perceptions of scientists as very clever, with more females agreeing (79%) with this than males (73%). Analysis of 2019 data however finds this gender difference is no longer significant, and levels of male agreement (56%) and females agreement are similar (60%).

Change in Parental Attitudes to Science

We have seen changes in young people’s reporting of their parents’ views on science, with some statements show an increase in agreement and other decreases.

Our baseline study in 2015 found a statistically significant difference between the genders reporting that ‘their parents have told me science is useful for my future’, with more males agreeing (62%) with this than females (50%). Analysis of 2019 data however finds this gender difference is no longer significant, with levels of male agreement (54%) now almost as low as females (53%).

We have seen a decrease in young people’s perception of the value of science from 2015 – 2019, both among males and females.

Our baseline study in 2015 found a statistically significant difference between the genders agreement with ‘a science qualification can help you get many types of job’, with more males agreeing (93%) with this than females (86%). Analysis of 2019 data however finds this gender difference is no longer significant, with levels of male agreement (82%) now almost as low as females (78%).

Parallels to Other Studies

The decline in ‘aspects of science capital’ among young people during 2015 – 2019 shown by this study are worrying, especially despite the efforts in recent years to improve this. Even more worrying is that we find evidence of this decline, among other studies with young people and among the general public, showing this decline is unlikely to be a regional or local issue.

If you are keen to read more about NUSTEM’s research activities, we have produced a report which shows how the NUSTEM Theory of Change allows us to evaluate the impact that our activities have had in a range of areas:  NUSTEM Impact Report 2014-2020.

You may also like to take a look our our research publications on our Publications and Dissemination page.