In the NUSTEM office this week we’ve been talking about Hololens, Microsoft’s forthcoming augmented reality headset. The technical demos are absolutely gobsmacking – here’s a demo of Minecraft being played like a tabletop game. That is, on a table:

Make sure you watch at least a minute of this. Awesome, right?

Well, yes. Probably. The problem with technical demos is that they have an annoying habit of showing things in the best possible light, with the final product once it reaches us being a whole lot less wonderful. Hands up everyone who plays all their games with Kinect, for example. Yeah, I thought so.

Hololens isn’t out yet, but it’s already received some sharp criticism. Can it really be as amazing as the demonstrations suggest? Well, maybe. Or perhaps it isn’t quite, but it’ll still be good enough to change the world. Gizmodo have a report from a journalist who’s used the system shown in the video above, and he reports:

I won’t lie—it was tiring to keep the HoloLens prototype on my head for so long, dealing with the narrow field of view. Having to remember where I left my virtual playthings, instead of simply turning my head towards things I can already see in the corners of my vision like in the real world. 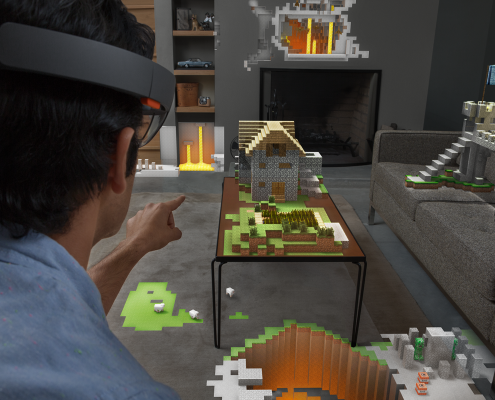 It’s already clear that the current system doesn’t quite deliver on the publicity images Microsoft put out a few months ago, like the Minecraft mockup shown here. Reports are still enthusiastic, however: this is clearly great technology… great enough to be next year’s computer interface revolution? Or is the narrow field of view a crippling limitation? We’ll have to wait and (literally) see.

But that’s the thing with this sort of tech – ideas can be laughably terrible for years before suddenly passing some ‘good enough’ threshold, and then immediately becoming ‘obvious.’ A great example of this is touchscreens and handheld computing. Back in the mid-1990s I was a fan of a tablet computer from Apple called the Newton. It was elegant and radical and tremendously clever but too weird to be a success. Its touchscreen technology was poor (you had to press quite hard) and black-on-green only (!), the processors were slow, and communication between the device and the internet was terrible, partly because the Web was being invented at the same time. Newton was abandoned in 1997, with nobody really noticing at the time.

Fast-forward ten years and the same company produced another touchscreen handheld computer, to initial responses like:

“[It’s] the most expensive phone in the world and it doesn’t appeal to business customers because it doesn’t have a keyboard which makes it not a very good email machine.”
— Microsoft CEO Steve Ballmer

Fast-forward again to today, and basically every mobile phone is a flat glass slab, just like that original iPhone. Well, of course it is. That’s the obvious way to make a phone, right? 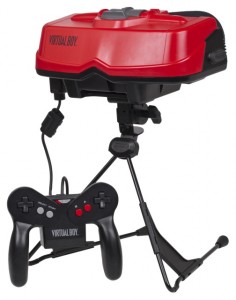 “Virtual-Boy-Set” by Evan-Amos – Own work. Licensed under Public Domain via Commons

Head to the Game On exhibition at the Centre for Life and you can see another example: hunt around, and you’ll see the weird red console in the picture here. Stick your head in and you can play a not-very-good tennis game. The Vitual Boy was a terrible product when it launched, and it lasted barely six months on sale; it’s Nintendo’s lowest-selling console ever.

Just around the corner from the Virtual Boy, there’s an Oculus Rift set. We won’t see that on sale until early next year, but try both devices and you’ll see how much progress has been made. Is Rift good enough? We’ll see, and soon.

So if Hololens doesn’t turn out to be good enough, something else will be. That something might be Magic Leap, another virtual/augmented reality headset. Details are sketchy, but the word is that Magic Leap’s headset doesn’t hang screens in front of you like Google Glass, Hololens or Rift. Rather, it projects light directly onto the front of your eye. Or something. It’s not quite clear.

That could solve the narrow field-of-view problem. Or it could be utter hype. At the moment all we have to go on are some enthusiastic press reports and a couple of videos which are hugely impressive, but perhaps less convincing than Microsoft’s?

…and then there are reports that Magic Leap might be playing a little fast and loose with the ideas they’re attempting to patent – several of the things they’re claiming appear to be drawing on the work of other designers and engineers, many of them students.

But that’s the thing: all of this stuff exists – the stepping stones that aren’t quite good enough, the breakthrough products, the ‘absolutely normal and expected’ mainstream – all of that exists because people imagined it, people worked out how to build it, and people got it done.

Booklet: What is So Exciting About Physics?

Half term with Think Physics
Scroll to top