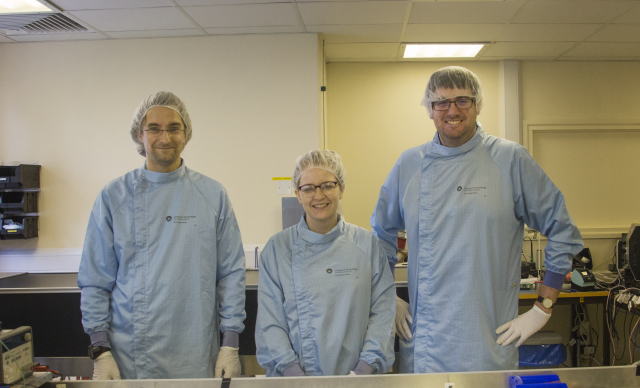 Jens is a senior detector scientist at the Rutherford Appleton Laboratory

The importance of foreign languages

Jens is originally from Germany, so he had a slightly different education to here in the UK. Jens did the equivalent of A-Levels in Physics and Maths and studied Physics at university. He then completed a PhD in particle physics. Looking back at his time in school he underestimated the importance of learning a new foreign languages.

“I was never good at languages, but being able to use them, made me appreciate them a lot more and I noticed that it often takes a lot less than perfection to get somewhere.“

Being a senior detector scientist

According to Jens, being a senior detector scientist often involves being curious, thinking outside of the box and coming up with newer, more efficient ways to do experiments. A big part of his time at work is spent designing, assembling and testing devices for particle physics experiments worldwide.

“I often set out, not knowing how to fix a problem or build something and am very gratified if I can live up to the challenge.“

CERN  is home to the most advanced particle physics experiments and this is Jens favourite place to work. It reminds him of the collaborative nature of scientific research. He is open-minded about working with new colleagues from different backgrounds.

However CERN is also a beautiful place to visit because is located on the boarder between the Jura mountains in France and the Alps in Switzerland.

When Jens is not working in particle physics experiments he has an unusual hobby: using physics and computing skills to make burnt ancient scrolls readable!  He also loves hiking:

I love to go hiking, as far and high as possible and whilst I am afraid of sudden drops, I am perfectly ok when I am wearing my safety gear. I love the Scottish highlands, tend to visit early every year and meet interesting new people in the middle of nowhere.