Our Space Maths workshop examines some of the ways that using maths can help us understand the scale of the solar system.

Size of the Moon, Planets, and their orbits

Diagrams of the solar system, like the one above from NASA/JPL, often show the planets very close together. There’s no good alternative in a diagram of this size – as you’ll see, drawing all the planets to scale, and their orbits to scale, a diagram as big as your screen would just look empty.

Sometimes it helps us grasp things if we hold things in our hands we can manipulate. It turns out, you can visualise the distance between the Earth and the Moon fairly easily: it’s about ten times the circumference of the Earth away from us. So:

That string is a visual representation of how far away the Moon is, compared to that ball as the Earth.

If we go further out then the problem with the solar system is that space is big. It’s really hard to create a solar system model which has the same scale for both the diameter of the planets and the distances between the planets. The activity we use for Think Physics is similar to The Earth as a peppercorn from the US National Optical Astronomy Observatory. There are variations on the theme all over the internet, but we found NOAO’s take particularly clear.

How big are the planets in relation to each other? 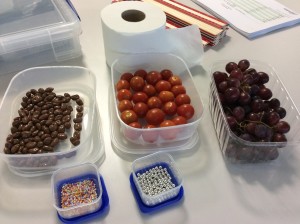 Objects to use in our scale model of the solar system.

Thinkzone has an online solar system calculator. Choose a size for the Sun, and it will work out how large the planets would be to scale, and how far away. For our workshop we start with a 22cm diameter football representing the Sun, and the picture right shows some of the other objects which work out to be the right sizes for our model.

Moving on: to the same scale, a silver dragée (one of those slightly crunchy silver balls you sometimes decorate cakes with. You might spot a theme here…) works to represent the Earth. A cherry tomato is good for Jupiter.

Having assembled our set of planetary objects, we then think about putting them in the right places relative to each other. If we put our football Sun in the centre of Think Physics’ base at Northumbria University, the orbit of our hundred and thousand Mercury just grazes the corners of our lab. The maps show where all the other planets would orbit:

The rocky planets with the Sun in Think Lab 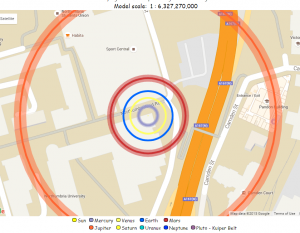 The solar system planets (and Pluto) 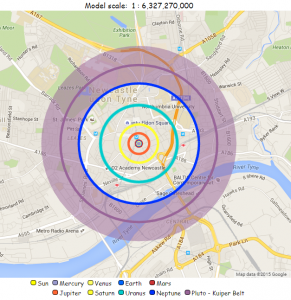 Scaling exercises like this are common in physics, as they help us get a ‘feel’ for how big things are relative to each other. Sometimes the sizes we’re dealing with are mind-blowingly large (or small), and the only way to make sense of them is to relate them to a more familiar world.

A classic approach to thinking about relative scales and the ranges of scale in our universe is the film Powers of Ten, made by designers Charles and Ray Eames with support from IBM. It’s old, but still remarkable.

If you want to explore similar sorts of ideas with more control, the website The Scale of the Universe 2 allows you to zoom in and out at will. Well worth a click.

How old are the Earth and the Solar System?

To work out how old the Solar system and the Earth are, we make use of rocks which were left over after the formation of the planets: meteorites. We’ve an entire activity page about meteorites.

In order to calculate how old meteorites are, astrogeologists (yes, that’s a job) make use of the natural radioactive elements in the rocks. All radioactive elements decay over time: some very quickly, others over much longer periods. When they decay they change into different elements, so by looking at the ratios of elements in the rock, it’s possible to calculate out how old the rock is. A similar method – carbon dating – is used to work out how old objects are on Earth.

Mac users: try right-clicking the downloaded file and selecting ‘Open’ – the file needs special permission from you before it can run.

If you do not want that we track your visist to our site you can disable tracking in your browser here: