My name is Jamie Clark, I’m half way through my first year of physics at AS-level, from Whitley Bay High School, and this is the start of my 5 day work experience placement with Think Physics!

Jamie was with us from 23rd-27th February. This is his placement diary – Jonathan.

I was excited of the prospect of my first day in a real world of work situation, but I learnt an early hard lesson, always check your metro ticket is valid…

After the early slip up I arrived at the university and was amazed to see so many different people and students all sitting together and talking, the whole building had a relaxed atmosphere. I was taken upstairs to the Think Physics office and was immediately greeted by the whole team and felt so welcome straight away. After a quick brief on the program and what they’re all about I was straight down to work. I was tasked with creating a quiz or interactive learning session to help the team when they tour local schools.

After a recent blog post by a famous sci-fi actor, who shall remain anonymous but is quite accustomed to space, I was inspired to think of the scale of the universe, but also the capability of a single person. I designed an interactive learning presentation, where the students will learn about the universe, its size and scale, but also about how they can change the world. I started off by doing some calculations to scale down the actual universe into something that would be easily representable and easier to understand for the children taking part. After a considerable amount of time dealing with large numbers, I realised the time. The environment of the office and everyone there made you feel so at home and was a complete change from the usual working environments I am in. In addition the ethos and motive the team have driving them on inspired me, as I am already passionate about education being the key to helping everyone no matter their background.

I’ve come to realise that I maybe should have prepared more for this week. I think the whole point of work experience is to get you prepared for the world of work, and after having been stopped again for an invalid metro ticket, I’m glad I’m having this experience now and not when I’m older, as inspectors aren’t as sympathetic to working age people. 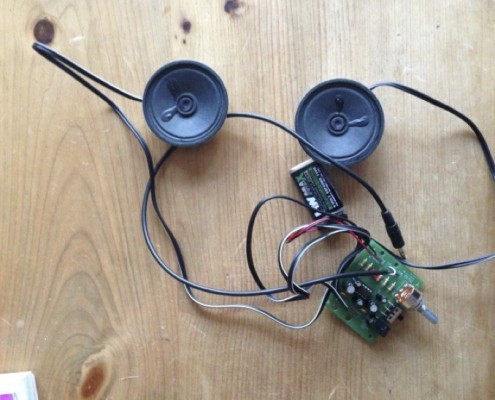 Later on in the day we met with the technician for the electrical engineering department and we were introduced to the equipment and what undergrads get up to. He then gave us some equipment and showed us how to assemble a simple circuit. We spent the following hours soldering and building up the circuit. My last experience of electronics and soldering was a few years ago, so it was good to be learning the skill again, especially as I wasn’t too good at it in year 9. Surprisingly my circuit worked, and we were able to use it as an amplifier for music. After this we did some advanced work on resonances and frequencies of sound waves, using oscilloscopes to determine the optimum height for the amplifier in a small cupboard. We also went on a tour of the faculty department and were able to see the renewable energy solutions that have put Northumbria on the map. It was interesting to see some of the postgrad work that was being done on the campus, and was insightful to see the real world applications of physics and electrical engineering.

Thankfully this time my ticket worked, as I made my way to the university for a three hour practical. We were given equipment and a lab script which gave us basic instructions on how to set up the Young’s Double Slit experiment. This experiment was relevant to my school work as a large part of the syllabus for year 12 involves light, diffraction and waves. However the work we carried out was at a much higher level to school, but it was helpful of the professors to guide us through the stages and explain to us what the countless jargon meant. By the end I was much more knowledgeable on waves, light and lasers and it was a good experience to use a helium gas laser, something I would never be trusted with at school!

In the afternoon I focused on my EPQ project which centres on the real world applications of quantum mechanics. After having a talk with Dr Beattie the day before I was given references to useful documents published in journals, and this was vital as I needed a direction and most importantly references for my EPQ project, before this I had a total of zero references. To start with I didn’t have much of an understanding of the information that was in the documents, but eventually I got more of an understanding and was able to use the diagrams and references from the journals. 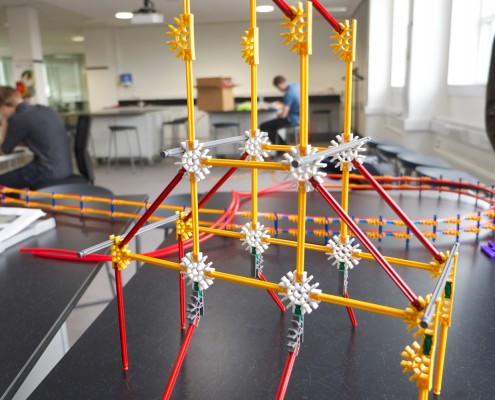 Arriving early, we got straight down to work helping the team prepare for a workshop with students in secondary school. We helped assemble and the order hundreds of Knex parts to build a rollercoaster. We also got the chance to design a crucial part of the build, the supporting tower, and it was good to put some mechanical lessons I’ve learnt at school into practice to make sure the tower was steady and would hold up the structure. During this time we learnt some more about the work the team does with secondary schools. Unfortunately I had to leave early as I was ill, and I missed the rest of the day, but I was preparing to come back eager and make no more public transport mistakes the following day!

Finally being able to use my metro week saver, I realised how much I have learnt in the past week with the Think Physics team. I’ve learnt what a real world office and environment is like, I’ve learnt about physics and the higher level aspects which I am eager to do myself at university, but I have also learnt valuable life lessons, the team have taught me lessons that I will never forget, and I am thankful to them for letting me have the opportunity to take part in this fantastic opportunity.

The main task for today was to carry on my research into the EPQ project, as I had a meeting again with Dr Beattie later that day. I decided to focus more on the equipment that is used in the systems, such as quantum dots, entangled LED’s, and single photon emitting LED’s. I’ve learnt so many new ideas, as during my EPQ at school I don’t have that much time, but at Think Physics I am able to spend hours just researching which has really helped me. After I had researched the equipment I then got some contacts who I could email to get even more information for my project. Having Dr Beattie helping me has been fantastic, as he has knowledge and contacts that I otherwise wouldn’t have known, and given the fact he is a leading researcher exactly in the field that I am writing my EPQ on has been excellent. 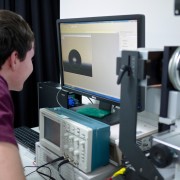 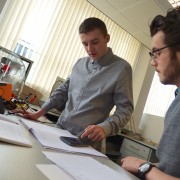 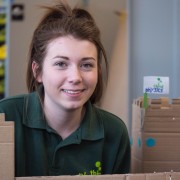