I recently had the pleasure of speaking with Hamish Johnston from the Physics World podcast about how we can encourage children to consider careers in science, technology, engineering and maths (STEM). During the interview, Hamish asked me whether there was research evidence to show that children were making career choices as young as eight. Those of you that know about NUSTEM will know that this is one of the areas that we have been researching for the past few years. I thought it would be helpful to outline the two different ways that we’ve used to look at the career choices of children in primary school.

The first method we have used is designed to explore what is the range of careers that children would consider doing in the future. This work is built on a theory proposed by Linda Gottfredson
called ‘Circumscription and compromise’ which describes how from a very young age children will limit their possible career choices based on the societal norms and expectations that they see
around them. The diagram below (from Gutman and Akerman (2008) and building on Gottfredson’s work) shows how children’s developmental progress gradually circumscribes the careers that they will consider from even before they start school, and then, once they are in the school system and start to understand some of the requirements of different jobs, they compromise their choices based on attainment and expectations. This leaves the children and young people with a Zone of Acceptable Alternatives: careers that they would be interested in doing, or at least, willing to do.

Children’s development of career ideas from Gutman and Akerman, 2008.

To measure young children’s Zone of Acceptable Alternatives, we developed a research game called STEMKAT (STEM Knowledge and Aspirations Tool).  We gave children 30 different job cards and asked them to short the jobs into two piles: those they knew about, and those they didn’t know about.  This gave us a simple measure of how many different jobs each child knew about.  The jobs were chosen to be a broad range with some that children should definitely know about (e.g. teacher, doctor) and some that they might not have come across (e.g. entrepreneur, engineer).  They were also chosen to have a range of qualification requirements and status.

You can read more about the detailed findings in our open access paper, including the positive effect that the work of NUSTEM in their schools has on children’s zone of acceptable alternatives.

The second method that we have used to explore children’s career ideas uses a more straightforward method. This time we simply asked children to write down three jobs they would like to do when they are older, and why. This allows us to explore in more detail the range of specific jobs children are considering and how they see their future ‘possible selves’. This method draws on a theory developed by Hazel Markus and Paula Nurius (1986) who say that “possible selves represent individuals’ ideas of what they might become, what they would like to become, and what they are afraid of becoming, and thus provide a conceptual link between cognition and motivation.”

Many studies that look at what children would like to do tend to ask about only one possible self or future job (e.g. Drawing the Future, OECD The Future at Five). However, at NUSTEM we felt that it was important to look at the range of possible selves that children could envisage for themselves which is why we asked them to name three jobs they would like to do. 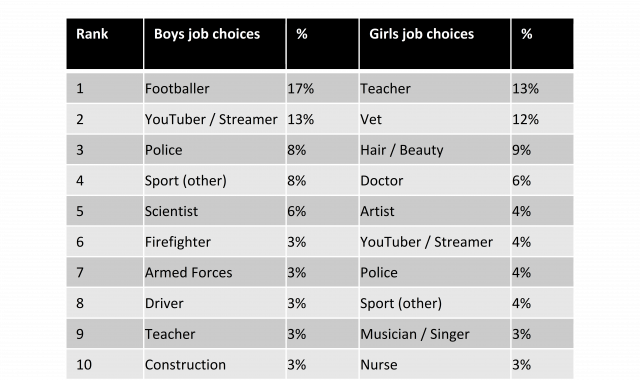 You can read more about this research in our paper presented at an IEEE conference in 2020.

Using these research methods in schools

Our second method is a very simple way of looking at the range of jobs individuals, and classes, are considering. If you are thinking about how to broaden the range of aspirations of your classes, then this would provide a quick way to track changes in aspirations over time. At the beginning of the year (or planned activity) ask the children to write down what they want to do (and why), and then at the end of the year you can ask them to repeat this. Looking at the range of jobs in the class will give a simple measure of the zone of acceptable alternatives, and looking at changes in individual children’s choices will see if there has been a broadening of an individual’s possible selves.

A note of caution: children will have developed their career ideas over a long time, and so short-term interventions may not cause an observable change in their choices. However, NUSTEM work with primary schools has shown that over the long term, sustained career activity can broaden the range of acceptable alternatives that children have.

If you’d like to talk to a member of NUSTEM about using the research methods in your school or college, then please email us nustem@northumbria.ac.uk