As part of Beamish Museum’s ‘Wind in Your Sails’ event, visitors today helped us make this amazing tetrahedral kite. It’s constructed from drinking straws, survival blanket, fishing line, and tape (OK, and a couple of cheeky lengths of dowelling to reinforce the keel and spine).

Built and flown (…and crashed) in the same day. Huge thanks to everyone who helped out. We hope you enjoyed building this as much as we did.

Better-known for inventing the telephone, Scotsman Alexander Graham-Bell was also obsessed with kites. Specifically, box kites based on tetrahedral cells, just like our. There’s a terrific set of photographs of these at Public Domain Review, here’s just a taster: 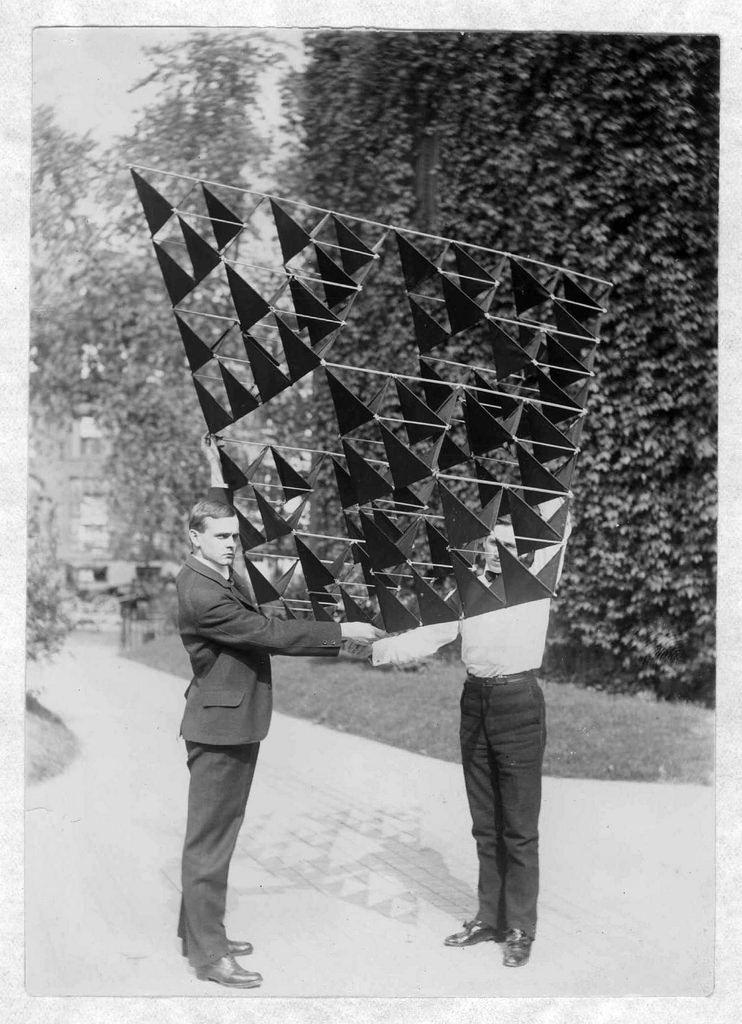 One of the neat features of this design is that it works at several different scales. If you think of the single tetrahedron as being one ‘cell’, then a 4-cell kite will fly pretty well. A 16-cell kite flies really well. Even in the gusty wind at Beamish, on Sunday Carol and Antonio managed this:

Thanks for all your help!

“One of the good things about engineering is that there are a lot of opportunities where you can use your skillset to make a difference, and make a difference in lots of different fields as well!”

Sophie grew up in a working class family from a mining village in the North of England. As a child, she remembers wanted to be an astronaut and being fascinated with Lego (she claims to have had the equivalent of her body weight in Lego!) and Meccano. Her parents encouraged her to go to university: they saw it as a good route to a professional job. Sophie recalls:

“When I was young I was always really into maths and science. I would have done a pure maths degree but there was something always nagging in the back of my mind […] I always wanted something more practical.”

With this combination of academic interests and practicality, she thinks engineering became an “inevitable” career path.

After she finished a PhD in flight mechanics from the University of Liverpool, Sophie got involved in many projects as an aerospace engineer. It’s a job she describes as being involved in the whole lifecycle of anything that flies: design, certification, operation, maintenance and safe disposal (decommissioning).

Vertical’s aircraft will be 100% electric, affordable, and could help ease road traffic in densely populated areas.

“All of the technologies to make this kind vehicle happen exist, we are not conjuring things out of thin air that don’t exist at the moment. It’s all about bringing those technologies together into a package to make it happen.”

In her current role Sophie is responsible for the simulator that will train pilots to fly the aircraft: she needs to be creative and logical. She also studies the performance of the air taxi, in particular how manipulating the controls translates into aircraft motion. The air taxi will be a once-in-a-lifetime achievement for Sophie and her colleagues, so she tells us that hard work is essential.

“Why did I become an engineer in first place? Because I wanted to be involved in projects like this, it’s completely innovative! That is human nature, we always want to find the next step, the next new thing. How can we put together the different technologies we’ve developed?”

Nothing great is easy

Outside of work. Sophie enjoys travel and particularly swimming. In 2012 she swam the English Channel, inspired by the first person to do so, Captain Webb, who said, “Nothing great is easy”. She has his quote as a tattoo.

“I am a mermaid when I’m not an engineer!”

She often colours her hair a different colour as this makes people notice and remember her. She says it‘s a good conversation starter!

Back to Inventive Podcast pages

Vertical Aerospace are a manufacturing company based in the UK, dedicated to designing and building vertical take off and landing aircraft that are electric-powered and hence zero emission in use.

Over the next few years the company aims to launch a flying taxi service: they aim to be the first zero-emission aircraft most people fly on. Between skyscrapers in New York, perhaps – their partners include American Airlines, Rolls-Royce, Microsoft, and aircraft leasing business Avalon. They hope their vehicles will be affordable, and they they’ll ease road traffic in densely populated areas. Similar vehicles might be used to help in disaster relief situations, transporting medicines, food or casualties.

To design, develop and make aircraft requires a lot of different STEM, and non-STEM based roles. Vertical Aerospace employ:

Although based in the Bristol, Vertical Aerospace is a global company, so there could be opportunities to travel.

You can see what current vacancies are available at Vertical Aerospace here.

Topics in Science and Maths that link to Vertical Aerospace: 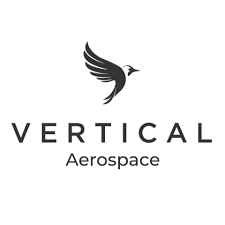 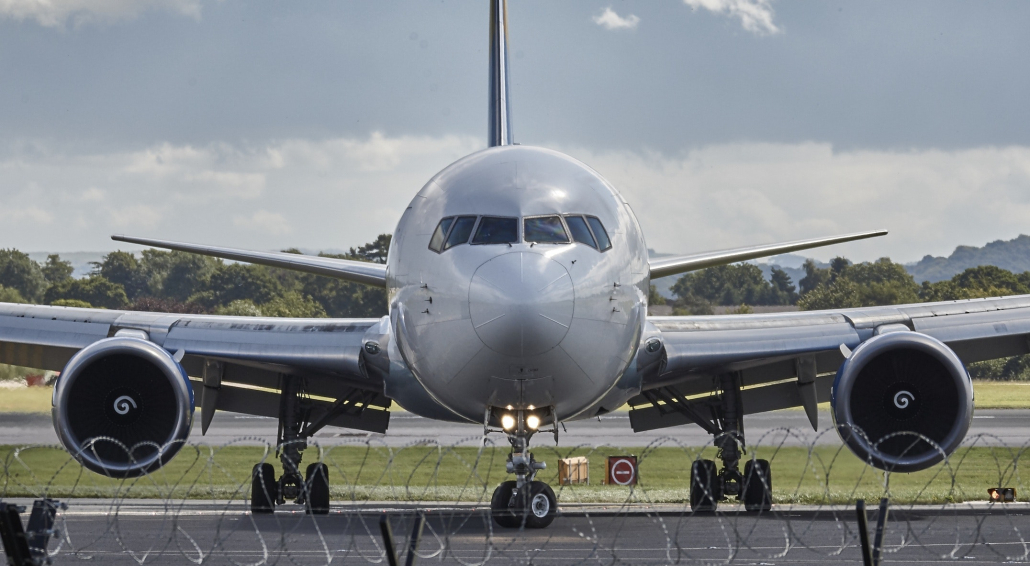 What is an Aerospace Engineer?

Aerospace engineers design, build and maintain aircraft, spacecraft, satellites, and missiles. They may be involved in creating and testing prototypes, researching ways to make fuel efficient parts, developing navigation systems, or supervising the manufacture and maintenance of aircraft or spacecraft.

Do try this at home: balloon engineering

To make a balloon rocket you need a balloon, a drinking straw, some tape and some paper or card to make the fins.

You could investigate these questions using your rocket:

If you have space in your house or garden, you could try making this rocket (click here for instructions). 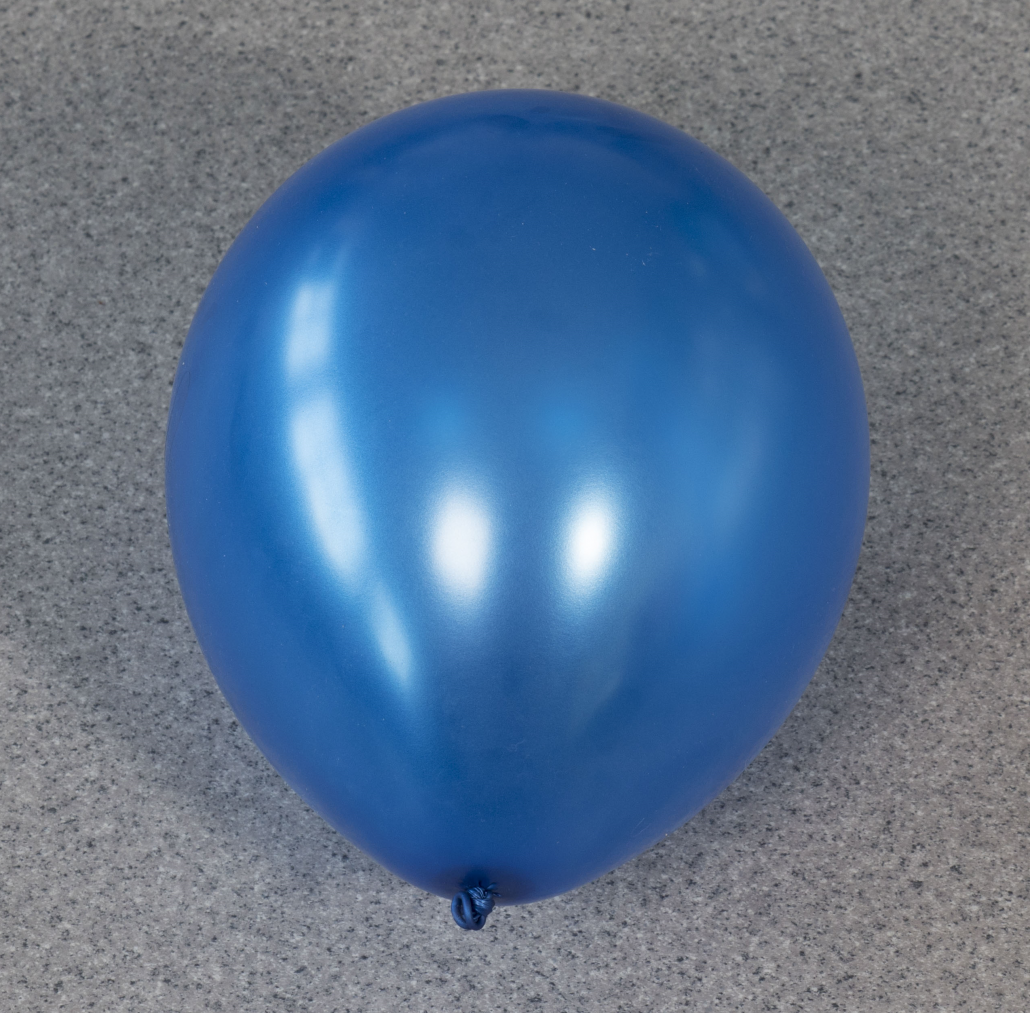 Do try this at home:catapult engineering

How does it work?

The more force you apply to a catapult, the more force is applied in turn to the object being launched. More force means more speed and – you’d hope – more distance. If you make one of the catapults, you’ll find that pulling the lolly stick back harder shoots the projectile (the marshmallow) faster and further.

If you modify your catapult by adding a spoon, you can add more force by pulling the top of the spoon back further. 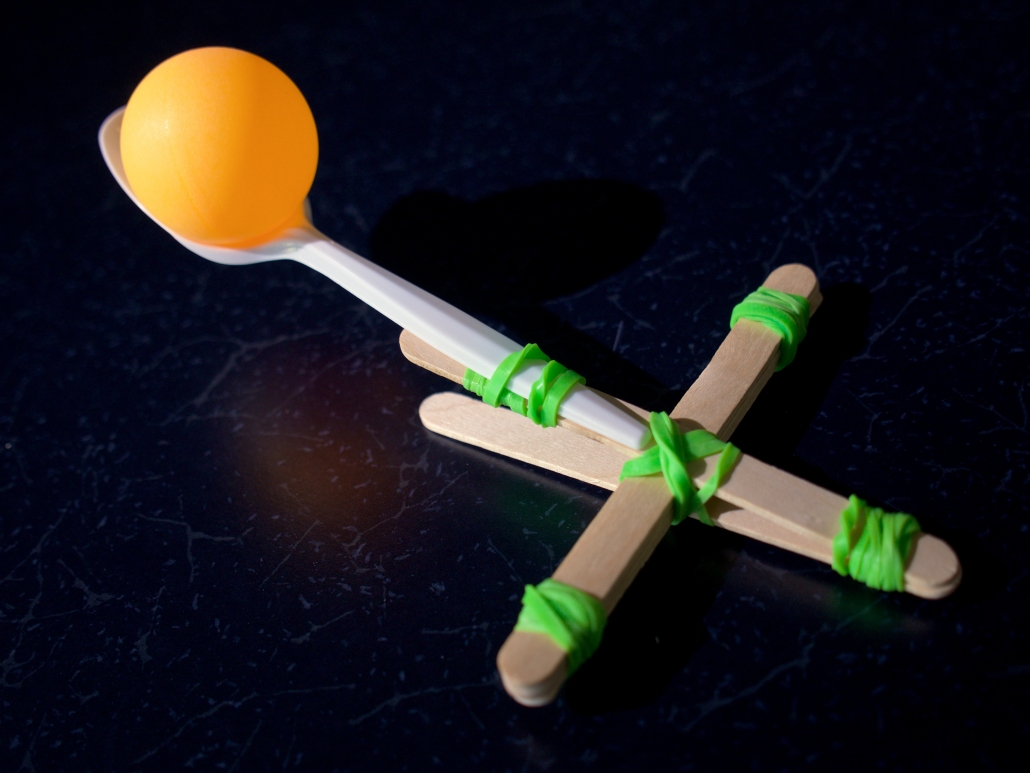 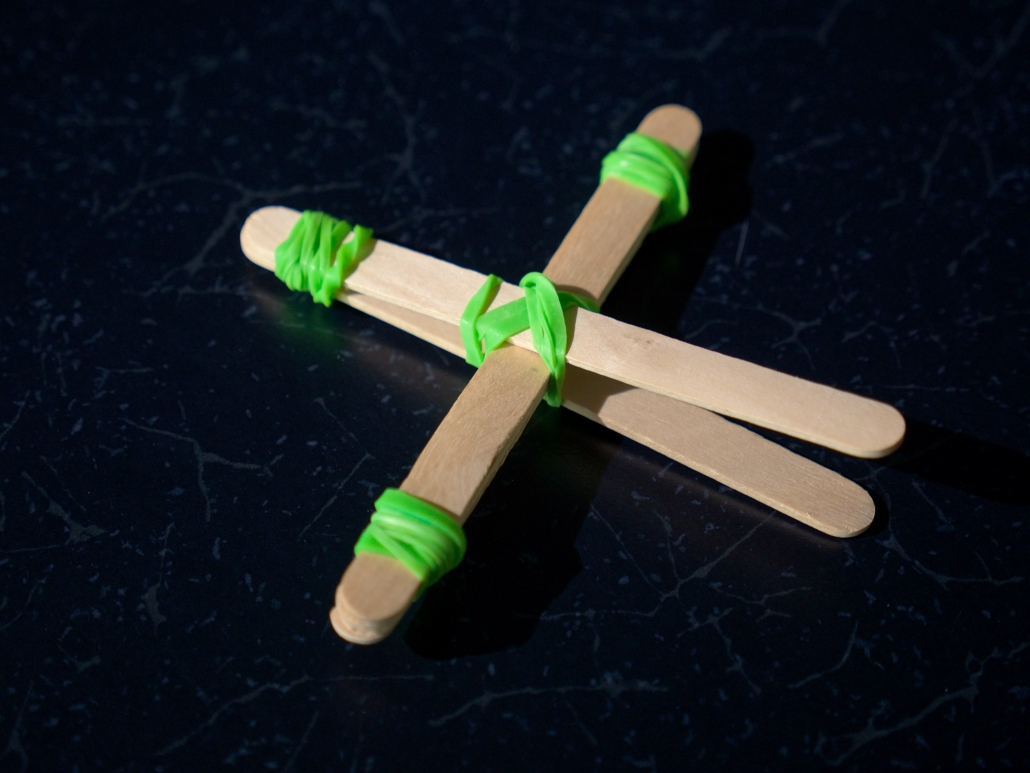 Despite its size, the giant catapult in this video is simpler. See the instructions here, and remember that the more force you apply to pull back the catapult elastic, the greater the force applied to the projectile, and the faster and further it will travel.

If we worked on the assumption that what is accepted as true really is true, then there would be little hope for advance – Orville Wright

When the Wright Brothers, Wilbur and Orville, first set out to build a successful aeroplane, they were mocked. People believed it couldn’t be done and, even if it could, there would be no commercial use! The brothers proved their doubters wrong: on the 17th December 1903 they made two successful (if rather short) flights in a powered aeroplane, controlled by a pilot. If you want to find out a little more about the history of flight, have a look at the gallery below.

Now it’s your turn to defy convention by building and flying a Big Mouthed Tumblewing, a flying craft unlike any you’ve seen before. Tumblewings are very light spinning shapes that glide – surf, almost – on an updraft of air. There are many designs, but we particularly like this one, designed by Slater Harrison over at the excellent sciencetoymaker.org. Check out this video for tips on making and flying your own.

They’re easy to make, but keeping them airborne is a knack that takes practice. You’ll need open space indoors and lots of perseverance. The film will help you spot the things you’re doing right and wrong.

If you would like to make your own, we have:

We’ll update this page with a flying training film once we’ve made one we’re happy with – in the meantime, do watch the video above. It’ll help explain what’s going on, and more importantly how to do it yourself.

Our thanks to Slater Harrison for sharing his brilliantly simple tumblewing design with us. Do visit his site! 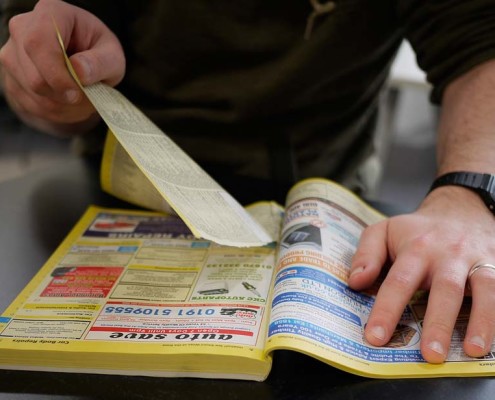 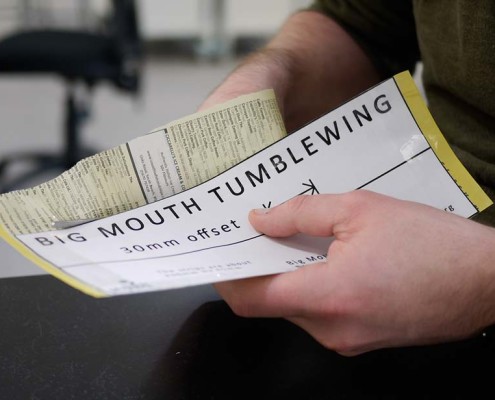 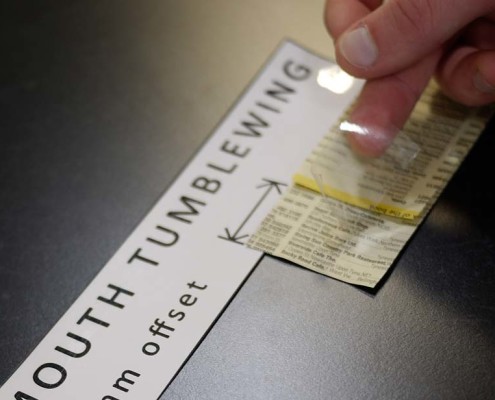 Tumblewings are unusual, as wings go. If you look at an aeroplane, you’ll immediately notice one key difference: their wings don’t spin. The same is true of birds, which is probably good for gannets or they’d get terribly dizzy. Helicopter wings do spin, but think about it a little and you’ll notice that they’re not spinning in the same sort of way.

So: Tumblewings. Their spin helps keep them stable, but it also makes them slide forwards through the air as they fall. Walking behind them with a board generates an updraft of air, balancing that fall. Sometimes you’ll see birds – like that happily-not-dizzy gannet – soaring on the updraft at a cliff or hill. They’re doing the same sort of thing, but much more efficiently.

Birds and aeroplanes can glide further than tumblewings because they’re much more efficient wings. Explaining how wings generate lift is a famously subtle challenge. Here’s an animation from Derek Muller of Veritasium, which is about as good as anything we’ve seen.

When you look at the gliders and aeroplanes the Wright Brothers made, sometimes they don’t look much more advanced than the tumblewing – just a few bits of canvas held apart by some sticks. Perhaps a bit more than a weekend project?